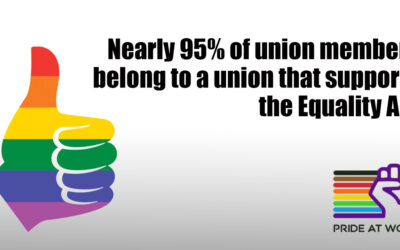 With the reintroduction of the Equality Act (H.R. 5) in the US House of Representatives, the legislation is drawing more support from the labor movement than ever. More than 90% of all union members belong to a union that supports the Equality Act and the number continues to grow by […]

How Unions Can Protect LGBT Rights in the Age of Trump

After a decade of unprecedented progress, LGBT activists find themselves  facing challenges that few of us could have foreseen even a year ago. While the new Trump administration has not made its attitude toward LGBT people completely clear, it represents social forces that are mostly hostile to LGBT rights. And […]

T-Mobile: We Want Justice, Not Marketing

Pride at Work applauds T-Mobile for putting funds in support of the marriage equality fight in Washington state.  They should.  But if T-Mobile really supported full legal equality, they wouldn’t be fighting tooth and nail against their own workers efforts to form a union and have a voice on the […]