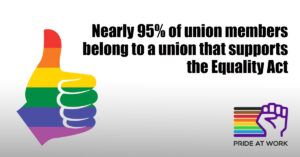 With the reintroduction of the Equality Act (H.R. 5) in the US House of Representatives, the legislation is drawing more support from the labor movement than ever. More than 90% of all union members belong to a union that supports the Equality Act and the number continues to grow by the day. Given the historic levels of support nationwide for LGBTQ equality, this should come as no surprise.

In June of 2020, unions joined the celebration when the US Supreme Court ruled that LGBTQ people cannot be fired for their sexual orientation or gender identity due to the protections against discrimination on the basis of sex found in Title VII of the Civil Rights Act of 1964. Unions have been negotiating these protections for decades in our collective agreements, but now it is the law nationwide.

The Equality Act will take those protections confirmed by the Supreme Court, and apply that same standard to other places where LGBTQ people face discrimination in their daily lives. Unions supporting the Equality Act know that LGBTQ Americans are still targeted heavily for harassment and discrimination in not just employment, but housing, credit, education, jury service, federally funded programs, and public spaces and services. The Equality Act would build on protections that already exist in laws such as the Civil Rights Act of 1964, the Americans With Disabilities Act, and more to include LGBTQ people.

Through our partnership with the AFL-CIO and its network of state affiliates, Pride at Work keeps a close eye on these bills every year, so we know just how important the Equality Act is to LGBTQ working people in every state. Now more than ever, we need consistent and durable nondiscrimination protections nationwide. More than half of all states still don’t have a state law that bans discrimination against LGBTQ people and every year, anti-LGBTQ legislation is introduced in dozens of state legislatures across the country.

The time to act is now.

List of unions and labor groups supporting the Equality Act