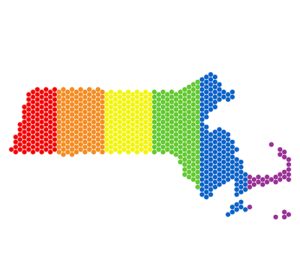 Pride at Work Eastern Massachusetts (Boston) is one of our oldest Pride at Work chapters, with origins dating back to the 1980s. The Gay and Lesbian Labor Activist Network (GALLAN) was a group of Boston based trade unionists who pushed for LGBTQ inclusion in both the workplace and the labor movement. GALLAN helped form Pride at Work nationally, and it’s activists became the Boston chapter. Current leadership includes life long labor activist Gerry Scoppettuolo, a founding member of ACT UP Nashville, and Kaleigh O’Keefe, a UAW shop steward at the Harvard Book Store, Kaleigh was recently elected to the boards of the Massachusetts AFL-CIO State Fed and the Greater Boston Labor Council.

More than 30 years later the chapter continues to work hard to stay relevant to LGBTQ working people. “When COVID-19 hit we had a lot of one on ones with workers mainly in the service industry. A member who works at a union bookstore worked with their union to start building a network of other bookstore workers in the area, to share ideas and advice, and to organize solidarity actions to ensure workers stay safe” chapter member Dru Maxcy told us. In May the chapter teamed up with the Greater Boston Labor Council to host a very successful online Queerantine Worker Panel.

“We have also been mobilizing our members to attend actions in support of racial justice after the murder of George Floyd” Gerry tells us,” and have joined a coalition of rank and file union members organizing in support of the movement. We are also involved in a local campaign to reinstate the majority black workers at Dorchester College Bound, who were all fired after organizing a union. Our chapter has a lot of white members, and we are thinking of ways we could recruit more BIPOC members and develop them into leaders within Pride at Work, their unions, workplaces, or other sites of labor organization.”

Kaleigh: “Pride at Work is the real reason I’m a unionist. When I got my current job, the union was completely inactive, never met, and hadn’t negotiated a contract in literally a decade. Now, we are extremely organized and united, and our members are very active. We’ve fought and won wage increases, extra protections for our LGBTQ members in our contract, health and safety issues, issues of organization and communication and more, and I wouldn’t have known how to lead these efforts without the constant support of Pride at Work.  Most recently we brought a petition to management with a list of demands in support of the Justice for George Floyd movement, including mandatory deescalation trainings to empower staff to have other options besides calling the police, addressing management’s hiring practices, and more.”

The chapter is also thinking about it’s future. “We aim to have more of a visible presence in our respective unions. In other words, we’d like to bring P@W to unions, and not wait for people to come to us! We also have a growing relationship with the Greater Boston Labor Council, and we look forward to seeing what that may bring!”