This World AIDS Day, a Reminder that TPP Could Threaten Access to Safe and Affordable HIV/AIDS Drugs 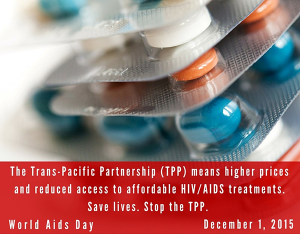 Washington – Every year on World AIDS Day, we stop to reflect on those we’ve lost to the fight against HIV/AIDS. While we have made important progress in treatment and advances toward a cure, this year the struggle to end the pandemic is facing a new challenge: The Trans-Pacific Partnership (TPP) trade deal.

How can a trade deal impact the fight against HIV/AIDS? The TPP would extend the patent on some drugs – including many of the most effective HIV/AIDS treatments. This change would have a dramatic effect on access to safe and affordable care for millions of people worldwide.

For example, Oxfam reports on an academic study that shows if the TPP were in effect today, more than 50% of those living with HIV/AIDS in Vietnam would lose access to their medications. There are over 250,000 people living with HIV in that country alone.

According to Pride at Work Executive Director Jerame Davis:

“World AIDS Day is an annual chance to reflect on our battle against the HIV/AIDS pandemic and a reminder that we have an obligation to care for each other. Continued worldwide progress in containing and fighting back against HIV/AIDS means access to affordable drugs. Unfortunately, by harming access to live-saving medications, the TPP poses a real threat to our continued progress in fighting the pandemic. Treatment of those living with the virus is needed not only to save the lives those living with HIV/AIDS, but to prevent new infections as well – those who have access to treatment are less likely to pass on the virus. Our trade deals should put people before profits, but TPP would do just the opposite.”

Pride At Work is a nonprofit organization and an officially recognized constituency group of the AFL-CIO (American Federation of Labor & Congress of Industrial Organizations.) We organize mutual support between the organized Labor Movement and the LGBT Community for social and economic justice. In addition to national Pride at Work, more than 20 Chapters organize at the state and local level around the country.