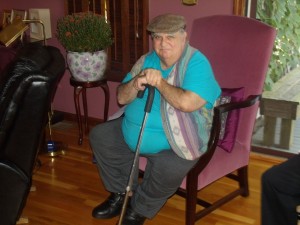 December 23, 2015 saw the untimely passing of Tom Barbera, a long-time labor and gay rights activist in the greater Boston area.  Never one to hold back his opinion or commitment to fighting injustice in every form, Tom’s passionate voice entered many political campaigns and debates in the 1980s, 90s and 2000s.

Tom was born in Atlantic City NJ to a solidly working class family and moved to Boston to attend Boston College.  Although he never moved back home, family remained central to Tom throughout his life.  He visited his extended family in NJ each Christmas and often during the year, particularly when family members were sick or needed help.  Each loss of a family member, parent or sibling, left him deeply pained for a long long time.

I first met Tom in the early years of the Gay and Lesbian Labor Activists Network (GALLAN), an organization of Boston area gay and lesbian union members that came together in the late 80s to bridge the two movements – bringing the fight for class and economic justice to gay and lesbian activism and the fight for gay rights to the labor movement. It is easy to forget what life was like for gay adults in the late 80s and early 90s as many folks were closeted at work, in their unions and to their families.  But not Tom.  He was as out as one could be, demanding not just acceptance but a full and fabulous welcome wherever he went.

In those early years of GALLAN, Tom was an employee at the Walter F. Fernald State School (serving people with developmental disabilities) and a member of SEIU 509.  He was as dedicated to supporting GALLAN’s agenda as he was to being a strong union activist.  Tom was also a major player in the Massachusetts Democratic Party – seeing his State Committee work and involvement in the GLBT or Disability Outreach Subcommittees as a way to build connections and elect individuals who would support the rights of working people, gay people and those on the opposite side of corporate power.  Never one to sit still, Tom spent nights at union meetings or working on electoral campaigns or attending community, labor and political functions, bringing his trademark ‘enthusiastic intensity’ to every coalition or organizing effort.  Of course this was just the early part of the evening; amazingly Tom always had energy for some fun after the work was done.

Through GALLAN, Tom spent countless hours in meetings with us lesbians.  “I feel like an honorary lesbian, honey” he’d espouse, after spending a lot of time with the GALLAN women organizing labor to stand with us on LGBT issues. From pressing for contractual and legislative domestic partnership benefits, to negotiating for non-discrimination clauses in contracts to ultimately fighting for marriage equality, Tom was a vital part of the effort to push the labor movement into the 21st century when it came to LGBT rights.

First and foremost Tom was a proud and passionate trade unionist.  His love for the labor movement was very deep.  If there was action he wanted to be there, providing solidarity to other struggles.  He was always ready to jump in to support local campaigns from shop-ins at Star Market with the UFCW to a contract struggle at Raytheon/IBEW 1505 to picket line support for striking SEIU nursing home workers — he built deep and lasting relationships with our straight brothers and sisters that overtime helped build labors’ support for LGBT issues.

Tom helped organize one of the first gay and lesbian receptions at the AFL-CIO in Washington DC, held in 1992.  And he was an active part of the founding Pride at Work (PAW) conference during Stonewalls 25th Anniversary in NYC in 1993.  His gay activism went back and forth between the local and national arena.  GALLAN members were truly his people, and with us he did it all, leafleted bars in support of ballot campaigns, organized GALLAN’s PAC to build political support, testified at the state house in favor of labor and gay/trans rights legislation, staffed the GALLAN booth at Boston’s annual Gay Pride parade, but he also brought his never ending energy and commitment to national PAW.  Tom flew all over the country attending National Executive Board (NEB) meetings.  On the NEB he took on the role of new organizing chair and spent countless hours and phone calls working with fledging gay labor activists in cities nationwide who wanted to build a chapter and become part of PAW.  He loved talking to emerging activists and getting them pumped to participate in PAW.

Within SEIU as well Tom was able to channel his queer sensibility.  Locally he helped grow his local’s Lavender Caucus, and nationally he worked with SEIU leaders from around the country to create an SEIU International Lavender Caucus.  First serving as the Membership/Outreach Director, he eventually took a turn as the National Co-Chair.

Back at home in the mid 1990s he became the first GALLAN/PAW delegate to the Greater Boston Labor Council and to serve on the Mass AFL-CIO Executive Board. He filled these roles with tremendous pride.  It wasn’t always easy to be the identified queer activist in the room, particularly in the days of the same sex marriage debate when our comrades had no problem sharing some questionable opinions on the issue.  But Tom just dug right in, no apologies, no regrets, he was here, he was queer, and everyone got used to it!

In the 2000s Tom was hired by SEIU 509 as the Community Organizer/Advocates Liaison, and in that role worked tirelessly to build relationships with the disability community.  In many ways the job was Tom’s dream come true — he was being paid to do the work he loved (while at the same time missing the life and voice of being a rank and file member).  Tom was deeply committed to advocating for the disabled population in part due to his work at Fernald, and of course Tom would do anything for his union.  This meant leaving town for long periods of time to volunteer on Presidential election campaigns.  Always ready to jump in, even when it compromised his health, Tom did electoral field work in multiple states.  But he always kept in touch with his people back home making it clear that Massachusetts was his ‘town’ and he would return as soon as he could.

In the past few years Tom faced some major health issues that limited his work and his activism.  Even when he was wheel chair bound with limited mobility, he did not give up the belief that over time he would be out in the world, back on track fighting for those less fortunate than him.  He was truly a ‘glass half full’ individual, just as ready to dish about a hot guy who crossed his path as relay an argument he had with a US Rep about a controversial topic.  No problem was too small for Tom to turn into a major cause — which was both a blessing and a curse depending on what side of the issue you were on.  We all knew when Tom was in disagreement with a strategy or campaign, there was no hiding it; and his dogged determination could certainly be intimidating and powerful to others at the table.   But at the same time Tom was always read to laugh, to gossip and to talk shop with anyone willing to engage.  Ultimately Tom loved his comrades, loved the movement and loved being a big, gay guy.

There is no replacing Tom Barbera.  As they say, he was a force.  Tom’s untiring commitment to a democratic labor movement, a progressive Democratic Party, electeds that represent the little guy and fight for workers rights, an LGBT community that took on economic and racial privilege, as well as his loyalty to friends and unending adoration for the many special people in his life, is impossible to put into words.

It is telling that he was on his way home for Christmas, back to visit family in New Jersey when he died.  The holiday and time with his family meant the world to him, and brought a sense of belonging that he loved to describe with classic ‘Tom Barbera passion’.

Tom embodied an era, a time, a set of values and a gay sensibility that can’t be replaced.

Tom, you will be missed.