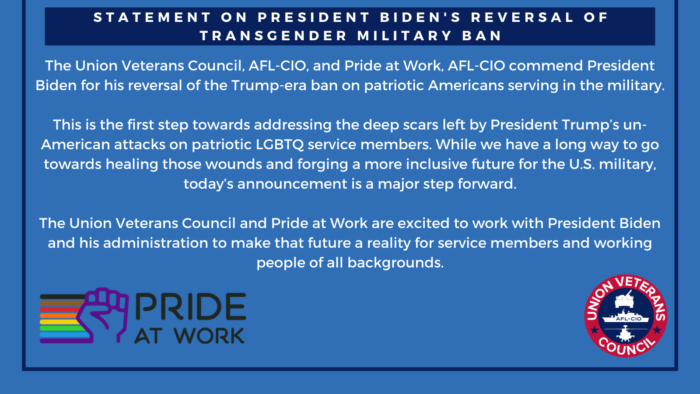 Washington, D.C. – The Union Veterans Council, AFL-CIO, and Pride at Work, AFL-CIO commend President Biden for his reversal of the Trump-era ban on patriotic Americans serving in the military.

“This is the first step towards addressing the deep scars left by President Trump’s un-American attacks on patriotic LGBTQ service members. While we have a long way to go towards healing those wounds and forging a more inclusive future for the U.S. military, today’s announcement is a major step forward.”

The Union Veterans Council and Pride at Work are excited to work with President Biden and his administration to make that future a reality for service members and working people of all backgrounds.”

The Union Veterans Council brings working class veterans together to speak out on the issues that impact us most, especially the need for good jobs and a strong, fully funded and staffed VA. Additionally, we hold private enterprise and elected officials accountable for their words and actions.  We believe wholeheartedly that the ability for someone to self-identify as “pro-veteran” isn’t determined by what lapel pin they don or what catchphrase they employ; veterans face real issues that require real actions—constructive actions that lead to positive solutions. Learn more at www.unionveterans.org

Pride At Work is the largest national organization that builds power for LGBTQIA+ working people. We organize mutual support between the organized Labor Movement and the LGBTQIA+ Community for social and economic justice. We seek full equality for LGBTQIA+ working people in our workplaces, our unions, and the public square. We organize in the spirit of the union movement’s historic motto, “An Injury to One is An Injury to All.” Learn more at www.prideatwork.org.