Banning abortion is just the beginning

The decision of the radical right-wing majority on the Supreme Court in Dobbs vs. Jackson, that denies the fundamental right of women to make their own healthcare decisions will go down as one of the worst decisions in the history of the court. With this decision, the extremists on the […]

For Immediate Release: November 19, 2021 Contact: Jerame Davis – jdavis@prideatwork.org Pride at Work Applauds House Passage of Build Back Better Act Washington, DC – This morning, The U.S. House of Representatives passed the Build Back Better Act, a landmark bill that provides a once in a generation investment into […] 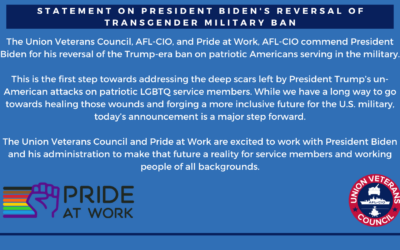 FOR IMMEDIATE RELEASE January 21, 2021 Contact: ian@newheightscommunications.com jdavis@prideatwork.org Washington, D.C. – The Union Veterans Council, AFL-CIO, and Pride at Work, AFL-CIO call for the immediate reversal of the Trump-era ban on patriotic Americans serving in the military. Banning transgender Americans from volunteer military service is an insult to our […]